The issue of an optimal diet for health has received much attention in the local media over the past year. A well-known scientist stated that the secret for an optimal diet lies in a high quality high protein, low carbohydrate diet. During the early 1900s people ate high protein diets and were healthier. The introduction of refined flour, sugar and processed foods during the later 1900s was associated with increased prevalence of obesity and non-communicable diseases (NCDs). Dietitians and nutritionists agree with the statement that excessive intakes of refined carbohydrates, especially sweetened cold drinks and fruit juices are associated with obesity and NCDs 1.

The view that cereals, fruits, vegetables and legumes should also be restricted in such an optimal diet in order to keep the carbohydrate content of the diet low, is more controversial. Such diet is proposed as a high-fat, moderate-protein, low-carbohydrate diet. This diet includes meats and fish, of which fats are not trimmed, full-cream dairy products and low carbohydrate vegetables, but no grains, legumes and fruits. The South African Food Based Dietary Guidelines (FBDGs) recommend eating a variety of foods daily, including starchy foods in each meal, eating meats, legumes, milk products, fruits and vegetables daily and limiting sugar, fats and alcohol 2.

We compared two typical menu plans, one based on a high-fat, moderate-protein, low-carbohydrate diet to another based on the SAFBDG recommendations. The energy and nutrient content of the diets are shown in Table 1. The main difference between the dietary patterns is that the FBDG based diet has half the amount of protein and fat and more than double the amount of carbohydrate of the high-fat diet with comparable energy content. The difference in fibre intake between the two diets is striking and the contribution to fibre intake from whole-grain cereals, legumes and fruits is clear. Dietary fibre prevents constipation, furthermore oligosaccharides and resistant starch are fermented in the colon, contributing to beneficial bacterial growth and production of butyric acid to protect against colon cancer. In particular the capacity of oligosaccharides to increase numbers of Bifidobacteria and Lactobacilli and a role for dietary fibre components in the promotion of beneficial bacterial growth to strengthen immune responses has been proposed 3.

Table 1. Comparison of energy, fibre and nutrient content of a high-fat, moderate-protein, low-carbohydrate diet and a diet based on the South African Food Based Dietary Guidelines 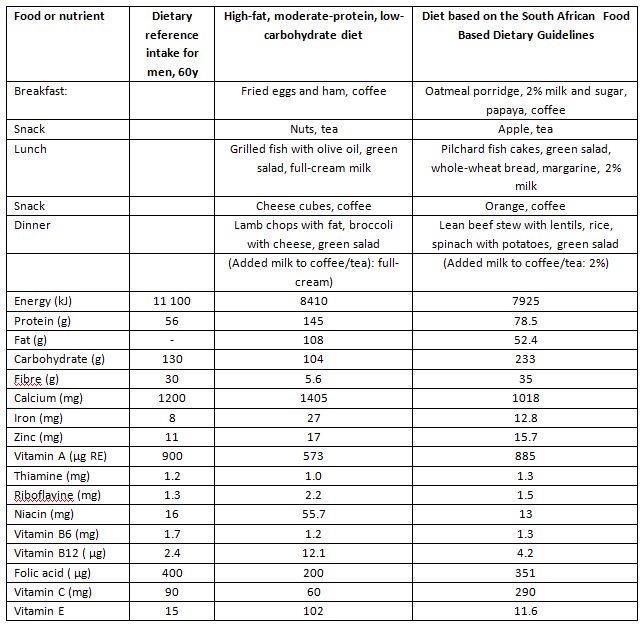 The total carbohydrate intake from this menu of the high-fat, moderate-protein, low-carbohydrate diet is only 104g, which is lower than the minimum recommended intake of 130g/day and is typical of the carbohydrate content of such diets. An intake of at least 130g/day is important, because the brain and nervous system is particularly reliant on a steady blood supply of glucose from carbohydrates in the diet 6.

Another key concern for the high-fat, moderate-protein, low-carbohydrate diet is the choice of foods often advocated to be included, for example biltong, nuts, and cheese. These would appreciably add to daily sodium intake. In a country where many people follow diets high in saturated fats and with a high prevalence of cardiovascular diseases 7, such advice at population level is irresponsible and counteracts the many years of education on heart health with a confusing and conflicting message.

The South African Food Guide being launched this National Nutrition Week (9 – 15 October 2012) is based on the sound evidence based nutrition principles of the FBDGs (Vorster et al, 2001), and should remain the cornerstone of dietary advice for South Africans (http://www.nutritionweek.co.za).